IndianasNewsCenter.com, the ABC and NBC affiliate in Fort Wayne, is running a new series on local small towns. They are kicking off this series with Churubusco. Check out their video below with Eric Olson:

If you were looking for a definition for small town America the name Churubusco would do. The town sprang up in 1838 when the railroad intersected the old Goshen Road, an ancient Indian trail. The early town served the local farm community and was an important source of lumber thanks to the local sawmill. When the legendary Lincoln Highway pushed through in 1913 it put Churubusco on the map. The town was always a sleepy community and would have stayed that way but for one brief yet notorious brush with fame. It revolved around Churubusco’s most famous phantom citizen; a guy named Oscar, the ‘Busco Beast.

Oscar’s story begins one night in1948 at a little lake on a farm east of town owned by Gayle Harris.

“And he and another fellow was up on the barn working on the roof,” says town historian Chuck Mathieu. “And apparently they spotted something in the lake and that kinda got the story started.”

Nobody knows what that something was but Harris and his buddies wasted no time trying to catch it. They built traps, they built cages, wire nets…sent down divers. The commotion caught the eye of local newspapers and the story took off from there.

“And it actually gained national acclaim,” says Chuck Mathieu. “Lowell Thomas was a radio commentator at the time and he did a story on it. Life Magazine sent Mike Shay out and he took photographs of it.”

As a breathless nation watched the hunt for Oscar escalated, climaxing with the ultimate strategy…draining the lake. Alas that strategy like all others was destined to fail.

“Mr. Harris I guess became ill,” says Chuck Mathieu, “and then winter set in and they never did get it completely drained.”

And that’s where Oscar’s trail grew cold. Though he was never found most folks think Oscar was a giant turtle, perhaps a southern alligator snapper that ventured too far north. Whatever it was Oscar’s story lives today. the ‘Busco Beast guards downtown Churubusco, welcomes folks to the local park, guards the towns water supply and is celebrated each year during the turtle days festival. So even though he never showed his face, Oscar the turtle is the gift that just keeps giving, to life in this very pleasant town.

Cindy’s Diner was recently reviewed in the Fort Wayne News-Sentinel.com, by Cindy Larson:

“If anybody ever asked me for a list of the top 10 must-experience restaurants in Fort Wayne, of course Cindy’s Diner would be near the top.

This little gem anchors the corner of Wayne and Harrison (Lincoln Highway) streets downtown and is beloved by many. The 1953 luncheonette owned by John and Cindy Scheele was moved to its present location in 1990.

Cindy’s motto is “serving the world, 15 at a time” because that’s all the seats the tiny diner holds, although they have added a few tables outside.” 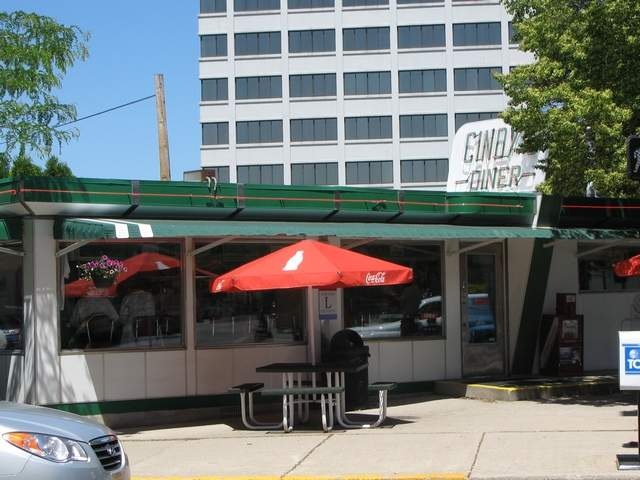 Photo by Cindy Larson of The News-Sentinel

Cindy’s Diner is actually bigger than normal for a Valentine Diner, as many models from this Kansas manufacturer only had 8 – 10 stools.  You can read more about these diners at the Kansas Historical Society website:
http://www.kshs.org/p/travel-by-theme-diners/10398